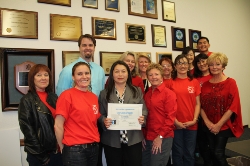 ROWLAND HEIGHTS, CA – FEBRUARY 13, 2014 – Rowland Unified School District’s Alvarado Intermediate School has been recognized for the fourth time as one of California’s 2014 Schools to Watch – Taking Center Stage model middle schools.  California State Schools Chief Tom Tolarkson announced there were 11 new designated schools to receive this award and that Alvarado Intermediate was one of 12 schools to receive re-designation in the state and national program which identifies high-performing middle grade schools in the areas of academic excellence, development responsiveness, social equity and organizational capacity to support sustained improvement. The school was first named a Model Middle School in 2004, then re-designated in 2007, 2011 and in 2014.

“We are proud that our school offers strong academics that meet the needs of all of our students. We are fortunate that at Alvarado we offer a wide variety of math programs and foreign language. We also have a wide array of electives and award-winning programs in music such as Marching Band, Jazz Band, Chorus, Color Guard and Drumline. It’s an exciting time at Alvarado and the School to Watch recognition affirms that we are definitely headed in the right direction,” said Alvarado Principal Karen Magana.

Magana along with Alvarado teachers and staff were recognized for their achievement on Tuesday, February 11, 2014 at the Rowland Unified School District Board of Education meeting. Rowland USD Board President Heidi L. Gallegos said, “The entire Board of Education would like to congratulate Alvarado Intermediate for once again being named a National School to Watch – this is highly commendable and it shows the tremendous educational leadership and amazing teachers and staff that are dedicated to all students achieving at the highest levels.” Alvarado Intermediate will receive their official state re-designation at a ceremony to take place in Sacramento at the California Middle Grades Alliance annual luncheon February 27, 2014, and during the California League of Schools Conference February 28–March 2, 2014. The honored schools will have an opportunity to showcase their accomplishments and network with other middle grades educators from around the state.

Alvarado Intermediate serves grades 7th and 8th grade students in the Rowland Unified School District. It is a recognized and award-winning "School of Excellence" on a national and state level and is located at 1901 S. Desire Avenue in Rowland Heights. For more information, call (626)964-2358 or visit www.alvaradoschool.org

For more information about the Schools to Watch™—Taking Center Stage model school program, visit the California League of Middle Schools website at www.clms.net/stw

**PRESS RELEASE AVAILABLE BELOW IN BOTH ENGLISH AND CHINESE.